Back in February I posted a collage of my dad in the weight room, relearning some lifts he thought he could no longer perform. On that day we retaught my dad how to deadlift, walk the prowler, barbell curl, and incline press. One of the key features of that workout was using a lighter barbell to teach the lifts, specifically the curl and incline press. He had torn his bicep several months before(doing cable crossovers on a machine) and was hesitant to do any lifting for his upper body. He’s also had issues with arthritis in both shoulders, and, having tried to incline bench before, figured it was no longer a viable exercise. 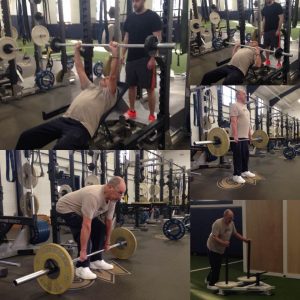 Our first step that day was to warm up; we loaded the prowler with 20lbs of weight and he pushed it for about 5-10 minutes to get a light sweat going. We then started the deadlift. Our screening process for the barbell lifts is simple. We start with a light weight and coach the athlete into the proper positions. We don’t screen each individual joint in isolation to get an idea of what the body will be trying to do  as a system. The result was a very good deadlift on day 1, working ultimately up to 1 set of 5 reps with 95lbs. We didn’t squat for a few reasons. The first is that my dad has had both hips and 1 knee replaced. He has learned a box squat progression, but given that he trains by himself, the deadlift is slightly simpler and our 5 step setup removes much confusion.

After deadlifting, Joe moved on to the incline press. Here we utilized our 15lb training bar. Having the right equipment is critical, especially for older individuals. Previously, Joe had only tried to incline bench with the 45lb bar and couldn’t do it. The solution was simple: less weight, and progressively allow the body and tissues to adapt to stress in a scalable way. The first few sets served as a warm up, and gradually the bar was able to come very close to his chest. We then added a little bit of weight(to 25lbs) and performed 3 sets of 5 reps.

Barbell curls were added at the end of the lift. Incline pressing and barbell curls are 2 useful variations that I took from Dr. Jonathon Sullivan, owner of Greysteel Strength and Conditioning. The overhead press was initially a no go for my dad, and flat bench presses can sometimes also be difficult for those with shoulder pain. We settled in the middle on the incline press, and it worked pain free. I’m confident that eventually, given direct coaching, a flat bench and overhead press would be achievable, but my father trains alone, and I wanted him to be able to perform something rather than nothing. Barbell curls are also a useful tool to train the upper body; the individual needs to balance on both feet with a moving load in the hand. We can progressively dose the exercise and train it just like any other lift. That day we finished with prowler walks, another exercise that is dosable and limited in the amount of eccentric damage it induces.

This past week, my brother and father were training in my dad’s garage gym, and my dad hit some fairly routine lifts on camera, including a 133lb deadlift for 5 reps, and an incline press of 65lbs for 5 reps. The lifts were submaximal(I’ll get some heavier lifts on camera later this month) and done with pretty solid technique, considering he’s been training solo.

None of the equipment is fancy. The “squat stands” were made from pouring concrete into a 5 gallon bucket and dropping a 4×4 into the mix. He’s got a barbell from Rogue and enough weight in bumper plates to keep him going. My dad built the bench himself, and needs to make sure he gets my mom to spot him to avoid any accidents! Barbell safety when training is critical, especially if training alone. The program he follows is simple: he trains twice per week and does some variations of the lifts to adjust for his body. He does a landmine press to replace the overhead press, deadlifts, incline bench presses, curls, box squats, and some bodybuilding type shoulder work. When he feels good he might push into some heavier singles on the deadlift, but the bulk of work comes in the 5 rep range.

Lastly, my dad wanted to give anyone out there reading and watching this some advice on training.

The message is simple, but profound. It’s never too late to begin training. You simply, as Joe says, need to get started. As an aside, besides the numerous health/performance benefits of weight training, one aspect that gets overlooked is the camaraderie. Some of my fondest memories are training with my friends, my brother, and father. At the time of this writing I’m 29 years old; as my dad is fond of saying, how many dads can say they train with their son who’s 50 years younger?

The Man Who Broke the Mountain